The CentriPipe system has been designed for corrosion protection and complete structural renewal of storm and sanitary sewer pipe between 30" to 120" in diameter.

The process begins with an engineer inspecting the pipe to be remediated. Based on the depth and size of the pipe, depth of the local water table, water load and other factors, the owner's engineer determines how thick the CentriPipe concrete inside the pipe should be.

Preparation then begins. Flow through the pipe is stopped or diverted in order for gravel, mud, roots and debris to be removed. 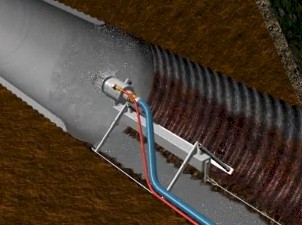 After this, the interior is thoroughly scoured by CentriPipe's high pressure spin washer. In some cases, buckling, leaks and inverts will have occurred in the existing pipe, requiring repair prior to spin casting. AP/M's self-consolidating PL-12,000 mortar is pumped into the damaged inverts. This permanently seals the bottom of the pipe, fills inverts and makes a new structural base to keep water from leaking in or out, a necessary step many methods can't address.

PL-12,000 leaves a new pipe floor that may be flat or contoured to the radius to enable flows. Then, CentriPipe's high-speed spin caster is placed in the center of the pipe at its far end.

As the AP/M's PL-8000 concrete is centrifugally cast evenly around the interior of the pipe, the application head is retracted by a computer-controlled motor at the properly calculated speed to insure an even thickness predetermined by the engineer. Note that the spin caster can be started and stopped as needed without joints or gaps The only thing left behind is seamless, high strength, fully structural pipe.

PL-8000 can be applied to concrete, clay, metal and brick culverts, and cures in place within hours for a quick return to service.

ASTM International has established the standards for manhole lining and will soon have a standard for CCCP: centrifugally-cast concrete pipe.